Romeo And Juliet In Verona

Shakespeare’s tale of the star-crossed lovers, Romeo and Juliet, is famous the world over. The story unfolds in fair Verona, a prosperous town in Italy that makes for a very picturesque setting. There are many sights related to Romeo and Juliet in Verona.

These include Juliet’s tomb and house, the Verona Love Wall and Juliet’s Club. Yet there is more to this tale than meets the eye.

Let’s go on the trail of Romeo and Juliet in Verona and find out more about the myths surrounding the iconic lovers. We will delve into the mysteries and try to separate fact from fiction.

Romeo and Juliet in Verona

The bard’s inspiration for Romeo and Juliet was an ancient Italian legend, upon which the writer Masuccio Salernitano based a novella in 1476. The tale was subsequently retold by Luigi da Porto in 1524 with Verona as the setting and the main characters named as Romeo and Juliet. The Capulet and Montague families in Shakespeare’s version were genuine Veronese aristocrats mentioned in Dante’s Divine Comedy.

However from here on, the willing suspension of disbelief is called for, as Juliet’s House belonged to the Cappello family…It’s certainly a similar sounding name to Capulet and this resemblance was seized upon by enterprising locals who proclaimed it to be Juliet’s House, or Casa di Giulietta in Italian.

The house on Via Cappello dates from the 13th century, however the iconic balcony was actually added in the 1930s, created from parts of a 17th century sarcophagus. Most surprising of all, there’s not even a balcony scene in Shakespeare’s play!

If you head inside, there’s a museum with the costumes and the bed that feature in Franco Zeffirelli’s 1986 classic film, as well as some other interesting exhibits. 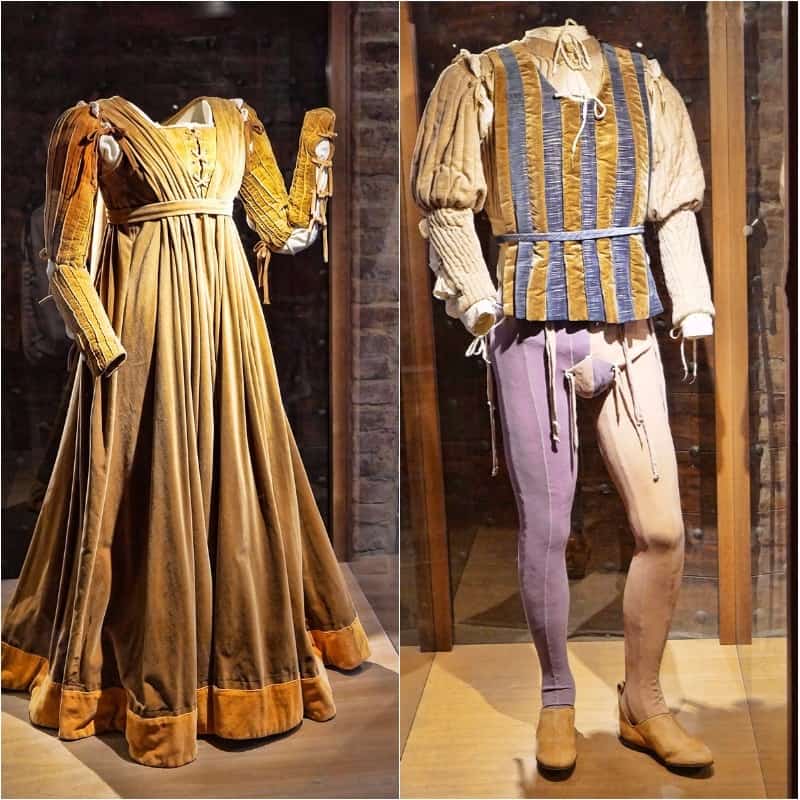 However the real draw is the famous balcony and the statue of Juliet. When visiting, do your best to arrive at opening time (8.30 am from Tuesday to Sunday, from 1.30 pm on Mondays) and you might manage to recreate the Romeo and Juliet balcony scene yourself.

Visitors can also pose with the statue of Juliet, and those looking for love might wish to rub her right breast for luck! 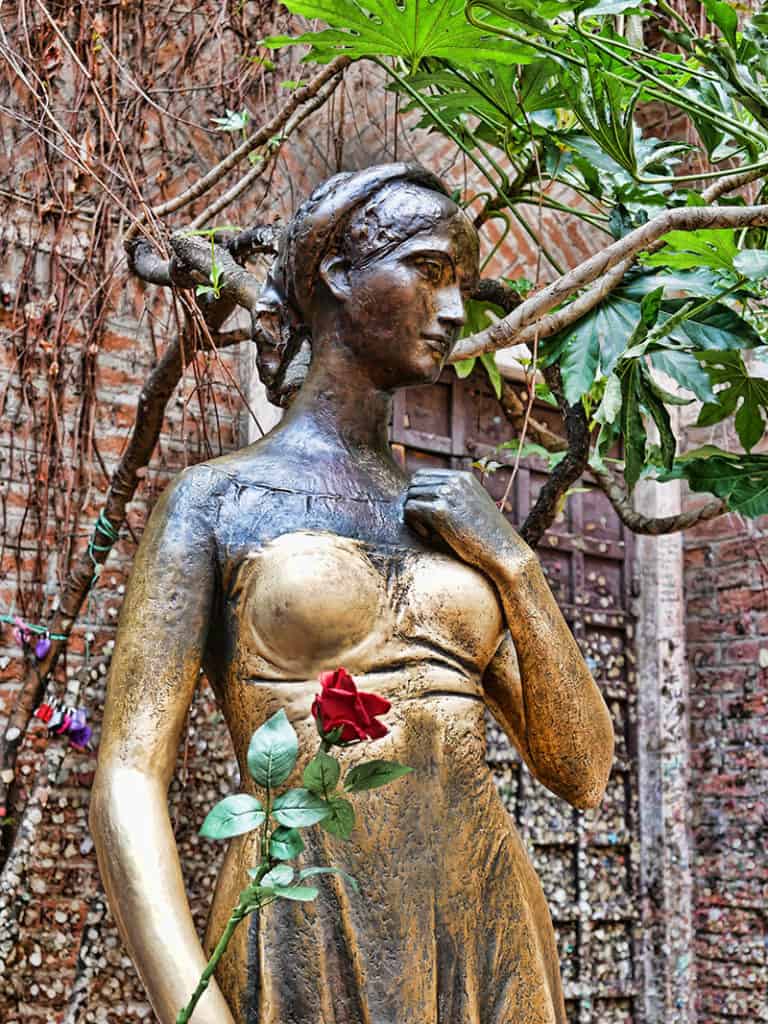 In the courtyard of Juliet’s House, there’s a whole Love Wall covered with graffiti and notes from visitors. The local authorities had originally tried to impose fines on those defacing the wall but realized they were fighting a losing battle so they cleverly created special removable panels where you are allowed to write or stick a message.

At peak visiting times, it can get extremely crowded in the courtyard. If you’re lucky to be staying at Palazzo Victoria, this beautiful townhouse has its own replica Love Wall, so getting a photo was a lot easier. We recommend travelling with Classic Collection Holidays, the luxury tailor-made holiday specialist.

One of the most charming Verona attractions,  The Juliet Club is a legacy of the Romeo and Juliet story. Made famous by the film, A Letter to Juliet, starring Amanda Seyfried and Vanessa Redgrave, it was established to help the thousands of people suffering in love. Volunteers reply to all missives addressed to Juliet, whether delivered by email, letter or by hand.

This is where fiction definitely rears its head, as Romeo’s House actually belonged to the Cagnolo–Nogarola family. However, it is a genuine medieval building and bears a plaque on the wall with this unforgettable quote:

‘Oh Romeo, Romeo, wherefore art thou Romeo?’
‘Tut! I have lost myself; I am not here.’

As it belongs to a family, the house on Via Arche Scaligere cannot be visited but is well worth a look from the outside.

Shakespeare chose the monastery of San Francesco al Corso as the scene of the tragedy where Romeo went to die next to Juliet. Located outside the city’s medieval walls on Via del Pontiere, Juliet’s Tomb, known in Italian as the Tomba di Giulietta, also houses a museum of frescoes. A series of wooden plaques feature key scenes from the play…

…whilst you might recognize this statue! Shakespeare is seated next to another famous quotation from his play:

‘Eyes, look your last!
Arms, take your last embrace!
And, lips, oh you the doors of breath, seal with a righteous kiss a dateless bargain to engrossing death!’

Entering the crypt where Juliet is allegedly buried in a simple grave, you feel a sense of awe and sadness.

One of the best ways to see Verona is to take a guided tour. The city is fairly compact and has a high concentration of interesting sights.

The Verona in Love Tour for small groups will show you the key filming locations from the Letters to Juliet movie. Led by an expert tour guide, this 75 minute walking tour is a great insight into this romantic city. 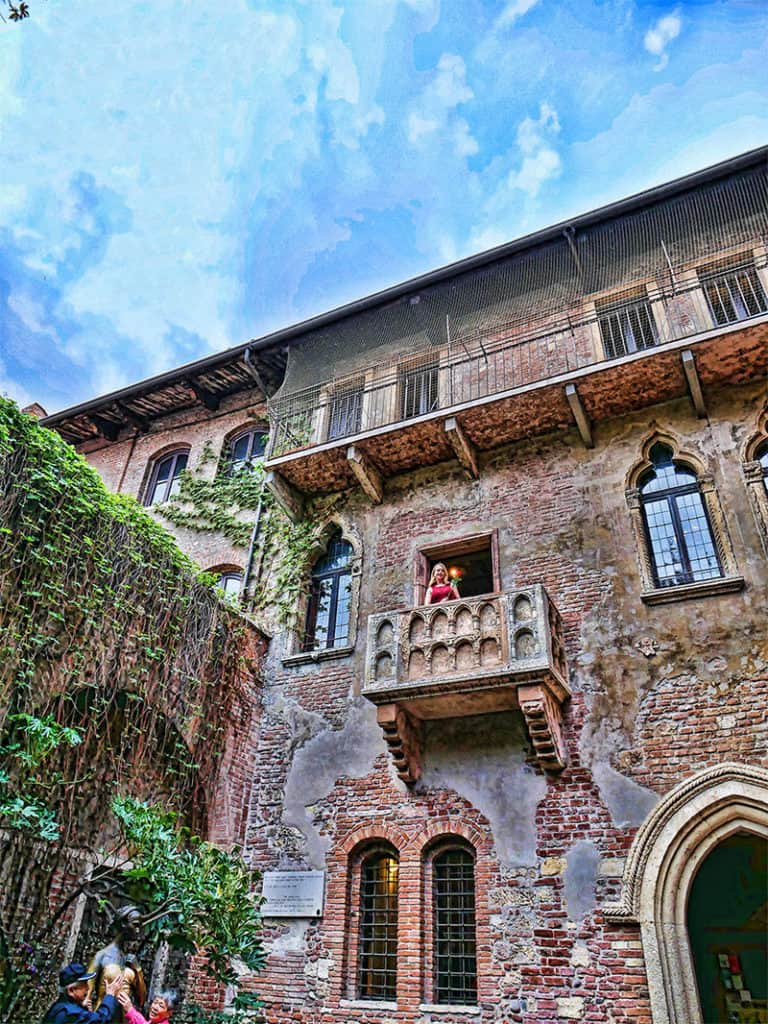 What is impressive about Verona is how they are keeping their medieval legacy intact. There are regular medieval markets held in Piazza delle Erbe, where the stall holders dress up in historical garb, and many other interesting things to do in Verona.

If you’re fortunate, you might also chance on a medieval parade as we did. It feels like you have time travelled back to the age of Romeo and Juliet in Verona.

So does it matter that elements of the Romeo and Juliet story in Verona are exaggerated or invented? To us, not at all, as we willingly visit film studios and other attractions that are based entirely on fiction.

It just goes to show how timeless the play is, for its continued resonance with people from all over the world. Moreover, the city itself is one of the most beautiful that we have visited in Italy where competition is high!

What are your thoughts on this and have you visited Verona?

We will leave you with these immortal lines from Juliet herself:

Good night, good night! Parting is such sweet sorrow, that I shall say good night till it be morrow.

Here are some more fun suggestions for things to do in Italy.

How is the sweetness of wine measured? An expert explains

The Rise and Fall of American Malls

Deck Profiles Aren't Made for YOU!!

The Best Poutine In Montreal | Best...

How to reset your BMW's settings with...