What To See And Do

Cyprus is a country with a rich archaeological heritage dating back to 5,800 BC. Blessed with a subtropical climate, this island really merits a visit. We’re sharing our favourite Cyprus landmarks, which you definitely shouldn’t miss on a trip to the island.

Also known as Petra tou Romiou or Rock of the Roman, Aphrodite’s Rock is a popular tourist attraction in Cyprus. This sea stack is situated on the road from Paphos to Limassol.

Famous as the mythological birthplace of Aphrodite, the Greek goddess of fertility, love and beauty, it’s one of the most beautiful places to visit in Cyprus. In fact, the nickname for Cyprus is “the island of love”, thanks to Aphrodite.

The currents here are quite strong so it’s best not to swim here. Despite that, there’s a legend that if you swim three times around the rock, then you will find true love.

Visitors are not permitted to climb Aphrodite’s Rock, however there’s a nice walk along the beach. There’s a restaurant called Petra tou Romiou on the hill nearby with great sea views.

Take a trip to the Troodos mountains in the centre of the island to see some impressive Byzantine monasteries and churches forming a UNESCO World Heritage site. Kykkos Monastery is one of the best of Cyprus tourist attractions, with colourful, ornate murals. Its full name is Panagia tou Kykkou.

The original monastery was established in the 11th century but devastated by fires, with the current building dating from 1831. You’ll be lent purple robes for your visit to the monastery and museum.

It’s beautifully maintained and houses an icon of Apostle Luke the Evangelist.

2 kilometres away on Throni Hill, you’ll come to the tomb of Archbishop Makarios III, the first president of Cyprus. He was an apprentice monk at the monastery in 1926 and requested to be buried close by.

Just a stone’s throw from the centre of Paphos and the harbour, Kato Paphos is one of the most famous landmarks in Cyprus. This UNESCO World Heritage site includes remains from prehistoric times to the Middle Ages, with particularly important Roman ruins.

The park is still being excavated and includes a theatre dating from the end of the fourth century BC. There are also several impressive Roman villas. 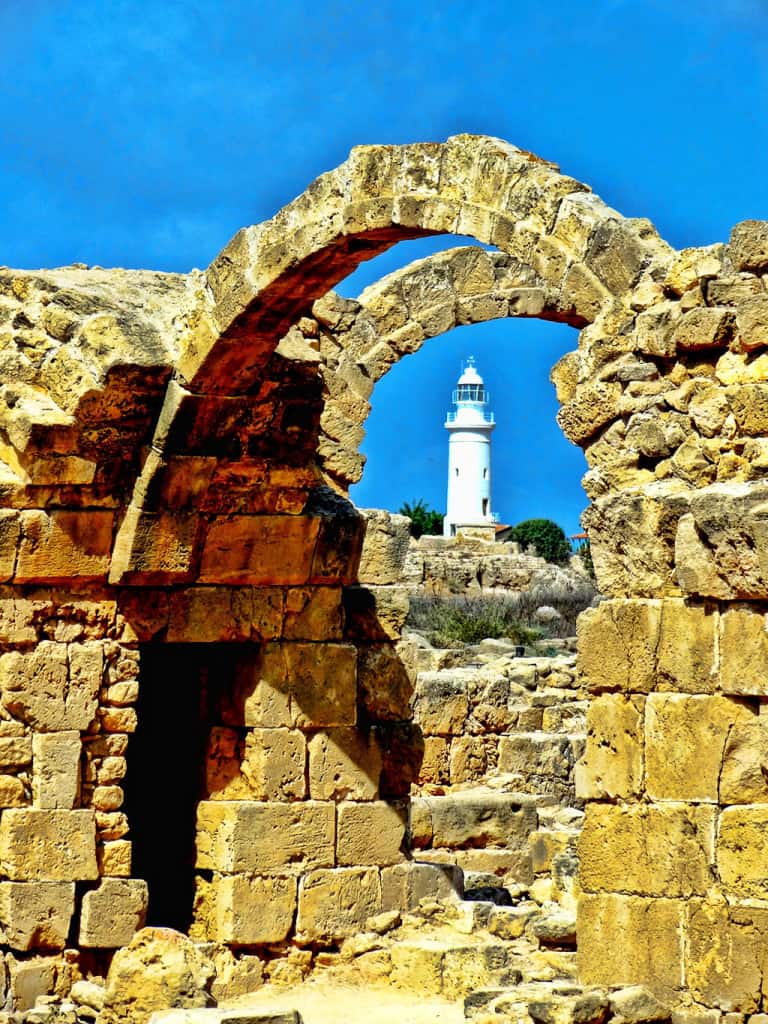 One of these, the House of Dionysus dates from the second century A.D. It contains stunning mosaics representing Dionysus, the god of wine. Spread over 2000 square metres, it was built towards the end of the 2nd century AD. There are 556 metres of ornate mosaic floors, featuring animals as well as the god Dionysus.

Another fascinating sight within Kato Paphos is the Tombs of the Kings, providing some welcome shade. Dating from the 4th century BC, these underground tombs are decorated with Doric pillars.

Although it was high ranking officials rather than kings who were buried here, the opulence of the surroundings gave them their name. In Egyptian tradition, tombs should be as decorative as houses for the living.

It’s thought that these Cypriot tombs were influenced by that way of thinking.

It can get very hot in here with little shade, so make sure to take water with you and a sunhat. 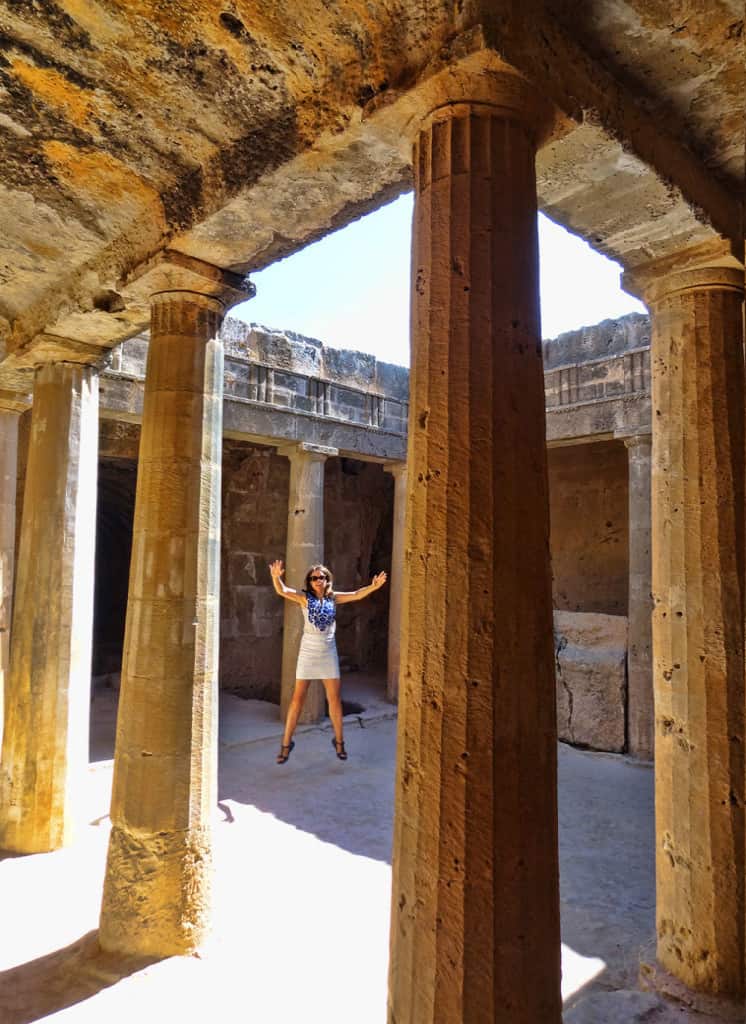 One of our favourite Cyprus hidden gems is Kourion, a well preserved archaeological site on a hillside overlooking the Mediterranean. You’ll find it on the Limassol to Paphos road, 17 kilometres west of Limassol.

Parts of the site are still undergoing excavation but the magnificent Greco-Roman amphitheater is fully restored and one of the most famous landmarks of Cyprus. Dating back to the second century BC and extended in the 2nd century AD, it can seat up to 3,500 spectators. Musical and theatrical events are regularly held here.

There are also some attractive mosaic floors and public baths to see, including the House of Achilles which dates from the 4th century AD. It was not at all crowded when we visited, and the entrance fee is priced €4.50.

Paphos town is a lively place with a charming harbour area that is partly pedestrianized. Paphos Castle dates from medieval times and was built to protect the harbour.

These days it’s a great place to enjoy the panoramic views over the surrounding area. Visiting the castle is one of the most popular things to do in Cyprus.

Where to Eat in Paphos

Dine at any of the beachfront restaurants and enjoy the beautiful sunset – we particularly liked Ouzeri, part of the Almyra hotel but open to non residents.

Away from the harbour but possibly the best place in Paphos for authentic Cypriot mezethes or small dishes, Seven St Georges Tavern is an utter delight. There’s no website but any cab driver will be able to take you there.

Dine in their courtyard garden and enjoy their loaf of homemade bread – when you leave, they’ll wrap up the loaf for you to take away.

What to Wear in Cyprus

The weather in Cyprus is constantly sunny with highs of over 30 °C in Summer. Therefore it’s wise to pack loose layers in cotton and linen fabrics.

In some of the archaeological sites, there is very little shade and therefore we suggest light cotton dresses with sleeves to protect your skin from burning, as well as a sunhat, sunglasses and suncream. In the evening, a maxi dress or linen trousers should help avoid insect bites.

Where to Stay in Cyprus

We recommend the luxurious Almyra hotel in Paphos- the name stands for taste of the sea and that sums up the lure of the place pretty well! With eight acres of landscaped gardens, its next door to the equally luxe Anabelle hotel.

As they’re part of the same group, guests can use the swimming pool and facilities of each hotel. We stayed in a Kyma Suite, with a large roof terrace and king size day bed – the perfect party or family pad!

If you’re visiting the Troodos Mountains, then Ambelikos Agro Hotel is a great place to stay and Apokryfo in Lofou is one of the best boutique hotels in Cyprus.

Whether you prefer to get some serious rest and relaxation or to take in the sights, Cyprus has so much to offer. There are also some very interesting things to do in Nicosia, the capital of Cyprus.

Have you ever visited the island of love and what are your favourite Cyprus landmarks?

Video of the Week: Take a Virtual Tour of a Striking Modern Home on Colorado’s Vail Mountain – Sotheby’s International Realty

10 Most Expensive Cities To Live In The...

The 20 Most Beautiful Places In Switzerland

10 Most Expensive Coffees In The World

17 Great Gifts For The Woman Who Wants...