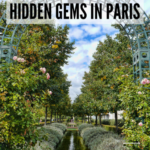 Paris is one of the top tourist destinations in the world, however there are plenty of lesser known sights to explore. From secret gardens to magnificent museums, it’s easy to get off the beaten track in Paris. Here are 5 unmissable hidden gems in Paris, together with nearby restaurants that Parisian locals love.

Head away from the main tourist sights like the Champs Elysees and you’ll find some amazing secret Paris spots. These are a few of our favorites.

The Palais Royal is a 17th century palace located near the Louvre. It was the former home of Cardinal Richelieu, followed by King Louis XIV up to the French revolution.

These are actually the only gardens in Paris that are classified as a “Remarkable Garden” by the French Ministry of Culture. They were created by Victor Louis in 1731 and are a real sanctuary on a Summer’s day.

On one side there’s a courtyard filled with black and white columns, designed by Daniel Buren in 1986. Flanked by contemporary and vintage fashion boutiques and cafes, it’s a lovely place for a stroll and one of the best Paris hidden gems.

If you’re lucky you might come across a mysterious birdman, as we did. This gentleman who attracted all the birds to him.

He let us in on his secret, give them bread soaked in milk and they will eat out of your hand. We certainly had fun once we’d got used to them landing on us!

2 – Gardens and Mansion Houses of the Marais

The Marais is one of the most unspoiled areas in Paris and Place des Vosges is a magnificent square, built by Henry IV in 1605. Although the square itself is quite well-known, if you venture into the side streets you’ll come across some lesser-known museums and parks that are really worth a visit.

Le Marais has some amazing museums including the Carnavalet Museum, which is all about the history of Paris, and the Picasso Museum. The Hotel de Soubise is one of the most charming Paris hidden gems, housing the Museum of French History and the National Archives.

We’d also recommend the Musée Cognacq-Jay which has a superb collection of decorative items and art from the 18th century.

Robert et Louise is an unpretentious little steak house at rue Vielle du Temple in the Marais. You can sit at the communal table and tuck into delicious potatoes, wood-fire cooked meat and a tasty creme brulee to finish. 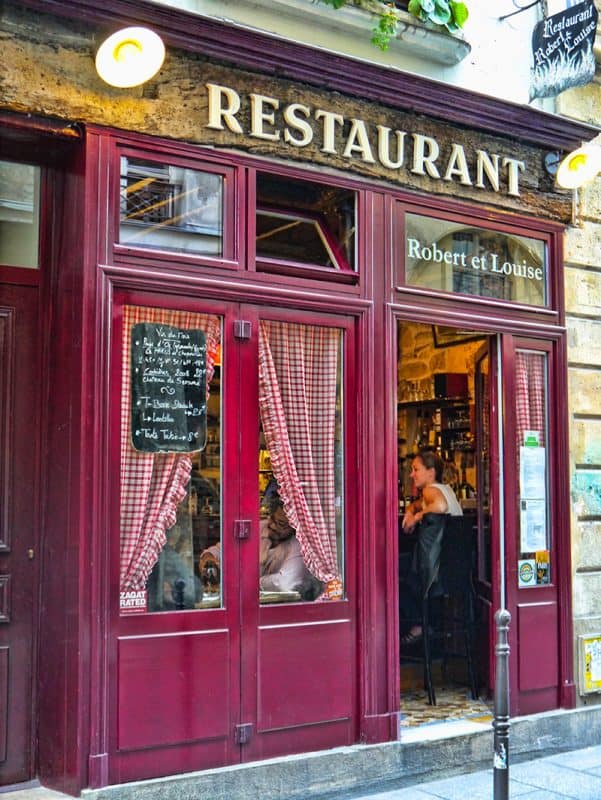 3 – The Passages of Paris

If you’re looking for untouristy and more hidden things to do in Paris, then head to the passages. The city has numerous covered malls dating from the 18th and 19th centuries, known as passages.

These days they house interesting shops and restaurants. One of our favourites is Galerie Vivienne, built in 1823 with mosaic floors and some great shops including Jean-Paul Gaultier. 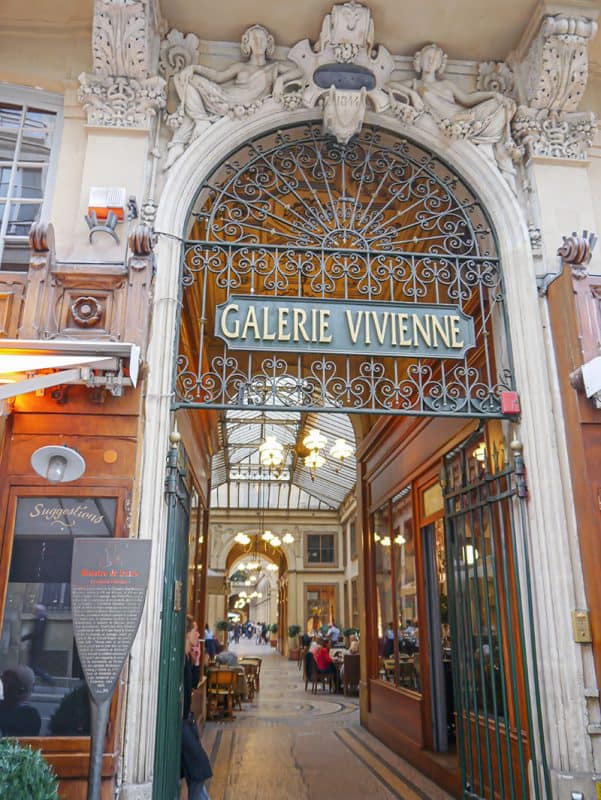 Nearby you can find the Passage du Grand Cerf in rue Saint Denis near the Chatelet les Halles shopping area. It was built in 1825 and is almost 12 metres tall, with an impressive glass roof.

The Galerie Vero-Dodat dates from 1826 and was one of the first passages to get gas lighting, in 1830. This shopping arcade houses two Christian Louboutin stores and the “By Terry” renowned make-up range.

A very cool option for a drink before or after dinner is Andy Wahloo on rue des Gravilliers. There’s a hidden Paris courtyard with Moroccan inspired decor.

It comes as no surprise that it’s owned by the Mazouz brothers who are behind Sketch and Momo in London.

A fun place for dinner is Le Grand Colbert, which film buffs will recognize from the film “Something’s Gotta Give” with Jack Nicholson and Diane Keaton. It’s a classic Parisian bistro serving up simple dishes like the roast chicken that Diane Keaton had in the film.

The building itself dates from 1825 and became a restaurant in 1900. It’s listed as a historical monument and has an impressive dining room with a mosaic floor as well as sculpted pillars in a Pompeian style.

One of our favourite secret things to do in Paris, this raised park was built on a disused viaduct and soars above the streets. The walk starts behind Bastille opera house, passes above avenue Daumesnil to the Jardin de Reuilly and finishes at Porte Dorée near the Bois de Vincennes.

Also known as the Coulée verte René-Dumont, quite a few Parisians don’t know of its existence. It’s a pleasant 4.7 kilometer scenic walk, which was completed in 1993. This Parisian walkway was the inspiration behind the Highline in New York. 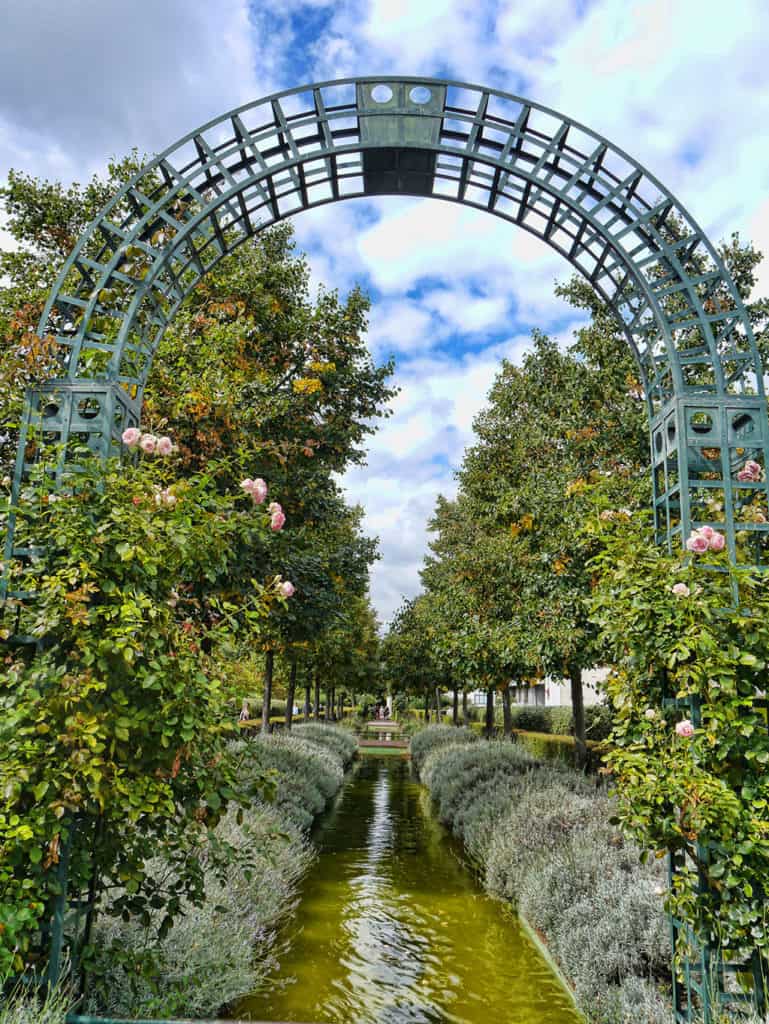 The park is planted with many rosebushes, trees and climbing plants. You get a great view over the surrounding buildings like this Postmodernist masterpiece.

Although this looks like an Art Deco era building, it was completed in 1991. Designed by Spanish architect Manolo Nuñez-Yanowsky, it houses a police station.

Below the viaduct, there’s a good selection of design shops and some good brunch spots like L’Arrosoir on Avenue Daumesnil.

Whilst Montmartre can be extremely busy, especially the area around Sacre Coeur Basilica, there are some lesser known streets that are well worth seeking out. Rue de l’Abreuvoir is one of our favourites, with its cobbled paving stones and pretty pink houses.

At the top of this picturesque Paris street, there’s La Maison Rose, one of the most Instagrammable places in Paris. The restaurant was painted pink by its original owners, Laure Germaine and her husband Ramon. Several famous artists such as Pablo Picasso and Maurice Utrillo frequented this charming place.

Did you know that the only vineyard in Paris can also be found in Montmartre? Located on rue des Saules, Le Clos Montmartre is a secret vineyard that holds an annual harvest festival, La Fete des Vendanges.

Also in Montmartre, don’t miss the incredible sinking house which you may have spotted on Instagram! You can find this building just next to the steps in front of Sacre Coeur. It’s an optical illusion, but if you rotate your photos it certainly looks like it is disappearing into the grass! 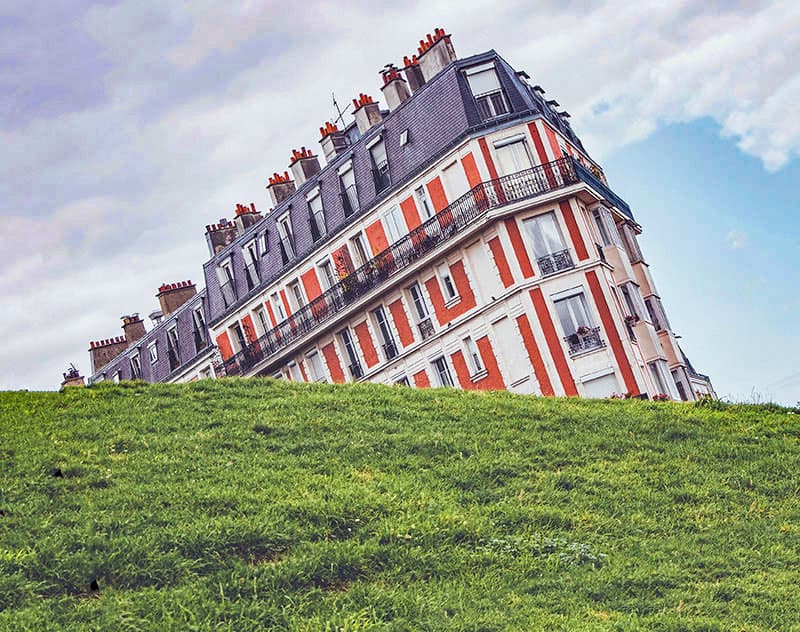 We hope you’ve enjoyed reading about our favourite hidden gems in Paris, one of our favourite luxury cities in Europe. Now after all that sightseeing, what about a bit of retail therapy in the 5 hottest Paris shopping districts?

And if you’re a fan of getting off the beaten path, you might want to check out our articles on hidden gems in Ibiza, London, Rome and Venice. Finally, we’ve rounded up the most famous French landmarks that you shouldn’t miss on a trip to France.

Check out some more international hidden gems below.

Over 40 great secret Ibiza places, restaurants and things to do.

Get off the tourist trail with these lesser known Rome attractions.

Off the beaten track places on the Andaman Coast in Thailand.

See Venice without the crowds at these secret spots.

Our favorite hidden gems in Europe.

How to START a Text Conversation With a Girl (12 Tips)

5 of the best poker rooms to visit in Las Vegas

10 Most Expensive Cities To Live In The...

The 20 Most Beautiful Places In Switzerland

10 Most Expensive Coffees In The World

17 Great Gifts For The Woman Who Wants...