14 Cool Things To Do In Languedoc Roussillon, South Of France

When you think of the South of France, the Languedoc region might not instantly spring to mind. However this area is a real hidden gem. From the medieval walled city of Carcassonne to the incredible pink salt lake in Guissan, there are lots of fun things to do in Languedoc Roussillon. For a luxury South of France vacation, this is a great choice.

There are some beautiful beaches in Languedoc, yet the area is less crowded than the French Riviera. Perhaps because of this, the local people are extremely welcoming.

Things to Do in Languedoc Roussillon

The Languedoc Roussillon region has a rich heritage, with many historic castles and natural attractions. It is part of the beautiful Occitanie region of France, which includes the regions of Languedoc-Roussillon and Midi-Pyrénées.

Here are some of the best places to visit in Languedoc Roussillon.

Stretching for 240 kilometers in the South of France, the Canal du Midi connects the Atlantic with the Mediterranean Sea. Built in the 17th century, the waterway network was designated a UNESCO World Heritage Site due to the way it effortlessly blends with the local environment.

The canal is known for its scenic bankside that meanders from Marseillan to Toulouse. A popular departure point is at the Port of Carcassonne on Promenade du Canal. Some of the river cruises include a lunch or dinner option.

This hilltop town is one of the best preserved medieval sites in the world. La Cité, the fortified part of Carcassonne, is a UNESCO World Heritage Site.

Visitors can wander freely around the old town of Carcassonne. We recommend taking a 2 hour walking tour of the city, where you’ll visit the Basilica of Our Lady of Nazaré and learn about the history of the Cathars.

There are many souvenir shops and courtyard restaurants such as Comte Roger.

You need to buy a ticket to enter Carcassonne Castle, or Château Comtal as it is known in French. The castle and ramparts skip the line ticket is worth getting, especially in Summertime. With this ticket, you can return to the castle enclosure at any time during the day.

We recommend arriving for the opening time of 10 am if you can. As there’s a lot to see inside, try to allow at least a couple of hours.

You could start with the busiest section, near the Porte Narbonnaise. Here you can great views of the surrounding countryside from the castle walls.

After lunch in one of the nearby restaurants, return to see the West Rampart. This section is one way only, so it’s important not to visit it before you’ve seen the rest of the castle.

It’s a lot less crowded than the other areas and you’ll be able to see the amphitheatre where Summer concerts are held. After visiting la Cite, head down to the lower town, known as the Bastide.

The Bastide of Carcassonne is the commercial heart of the city. Place Carnot has an impressive fountain and its cafes are popular with locals.

Languedoc Roussillon is known for its medieval hilltop castles. Although they are often nicknamed Cathar castles, they did not actually belong to the Cathars, who simply took refuge in some of them.

In the Middle Ages, the Cathars were a religious movement who believed that the material world was evil. They were persecuted as heretics for refusing to pay tithes to the Catholic church.

Some of the finest Cathar castles are:

One of the most unique places to visit in Languedoc Roussillon is the salt producer, Le Salin de l’Ile Saint-Martin de Gruissan. You can book onto a guided tour of the salt factory and visit the free museum, art gallery and shop.

It sells all kinds of flavored salt, both in ready made packs and as self-service. There are also lots of local specialties like salted caramels.

Of course, the main attraction here is the salt lake itself. At certain times of the year, the water turns a startling shade of pink.

This is due to the high levels of salt in the water and the presence of minute crustaceans. Flamingos in turn feed on them, thus getting their striking pink color.

La Cambuse du Saunier is a hidden gem of a restaurant, overlooking the salt lake. Savour the freshest oysters and seafood, washed down with a glass of local wine. 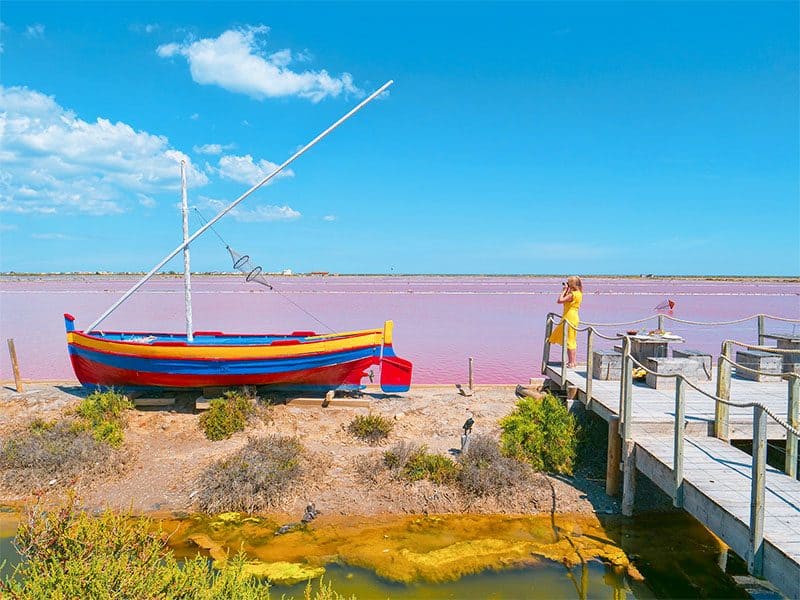 The Chateau de Gruissan is another interesting landmark. Dating from medieval times, it’s a ruin today but still cuts an impressive figure.

Named one of the most beautiful villages in France, Lagrasse has a stunning Benedictine abbey. Currently undergoing restoration, The Abbey of St. Mary of Lagrasse is curiously split into two.

The local municipality owns half the building, while monks own the rest of the monastery. Visitors can choose to see either side or both!

As you wander through the village, you’ll come across many ivy clad houses. A Michelin starred restaurant is also set to open here soon.

If you’d like to learn more about Languedoc wines, an ideal way is to take a wine tour. Wendy Gedney and her team at Vin en Vacances run tours throughout the Languedoc region and elsewhere in France.

Wendy is a highly knowledgeable and engaging guide who demystifies wine tasting and makes it very enjoyable. On the Carcassonne Vineyard Tours you’ll also see some picturesque local spots along the way.

Whether you’re a wine novice or an expert, you’re sure to enjoy these fun wine tours.

The beaches in Leucate are among the best in the South of France. There are 8 beaches in total, spread over 18 kilometers of coastline.

La Franqui Beach is one of the most popular, with free parking and shallow water that’s ideal for children. You’ll find a few beach clubs near Leucate, such as Le Ponton Club de Plage.

In Leucate town itself, see the main square with its picturesque pastel colored houses.

This little village dates from the Middle Ages and has been beautifully restored. There’s an impressive viaduct spanning the river Cesse.

The Pont Grand viaduct was used to transport water to the village. Cars are not allowed in the village, but there’s a car park close by from which you can walk into the village.

There are some charming shops selling local arts and crafts. If you’re here for lunch, try Relais Chantovent which is known for its tasty South of France cuisine.

The largest city in Languedoc Roussillon, Montpellier is the capital of the Hérault department. With a large student population, it is a bustling place.

Montpellier has several vineyards and hosts the International Vine and Wine Fair. Place de la Comédie is one of the most well known Montpellier landmarks.

The city’s main square, it is nicknamed l’Oeuf or the Egg due to its oval shape. The Fountain of the Three Graces stands at the center of the square, and dates from 1790.

This charming Languedoc town is known for its indoor market, les Halles de Narbonne, open daily from 7 am to 2 pm.

Cathédrale Saint-Just et Saint-Pasteur is a Gothic masterpiece dating from 1272. Although Narbonne Cathedral was never completed, it is still very impressive. The choir is one of the highest Gothic choirs in France at 40 meters.

Famous for its Roman remains, the city of Nimes is still a vibrant place today. Don’t miss the Arena of Nimes which is thought to have been built in the 1st century.

Maison Carrée is another exceptional Nimes landmark, over 2,000 years old. The temple is dedicated to Lucius and Gaius and Lucius Caesar, grandsons of the Emperor Augustus who died young.

This small French village is worth visiting for its lakes, which are frequently visited by pink flamingos. Peyriac de Mer is located in the heart of the Parc Naturel Régional de la Narbonnaise en Méditerranée.

This regional park is known for its natural beauty. There’s a nice walk around the lakes, and even if you don’t spot flamingos there are many birds such as cormorants and egrets to admire.

Another charming village in the Aude Department, Ribaute is a great spot for wild swimming in the South of France. If you don’t fancy that, sun yourself on the rocks by the cascade.

The Languedoc region makes some of the best wine in France. Languedoc red wine in particular has great complexity.

The department of Corbieres has created the Route du Vin to showcase the wonderful local wines. The Corbieres Wine Road encompasses five themed routes: the Alaric Route, the Cathar Chateaux Route, the Cru Boutenac Route, the Lake and Sea Route and the Narbonne to Lézignan-Corbières Route.

Where to Stay in Languedoc Roussillon

You can rent a luxury villa in Languedoc at a very favourable rate compared to Provence. One of our favourites is La Fraissinede, a former wine store that’s now a stylish place to stay.

There are also some great hotels in Languedoc Roussillon such as this Relais & Chateau near Montpellier and this luxury hotel in the centre of Nimes.  Or why not rent a Languedoc treehouse, barge or dome house for a truly unique stay! Here are some of the best ones below:

As you can see, Languedoc Roussillon is packed with interesting places to visit. This South of France hidden gem is well worth a visit.

Read all our French travel blogs

Looking for more travel hacks and tips? From hidden gems to unique experiences, we’ve got you covered.

Top tips for creating a sociable space in your garden