6 Fun Things To Do In Portland, Jamaica

Considered by many to be the prettiest of the island’s 14 parishes, Portland, Jamaica is certainly the greenest due to above average rainfall compared to the other parts of the island. What really makes this area stand out though is the laid-back vibe and beautiful beaches.

Fun Things to Do in Portland, Jamaica

From the birthplace of Jamaica jerk chicken to iconic Frenchman’s Cove, there are lots of places of interest in Portland. Located in North East Jamaica, Portland is close to Kingston, the capital.

This is a place of outstanding natural beauty. If it looks familiar to you that’s because it was featured in the film of the same name starring Brooke Shields.

This famous Jamaican spot used to be called Blue Hole but the name was changed to match the movie. The color of the water varies from a lush green to turquoise and deep blue depending on the light and the time of day.

This makes it a fun experience to swim in. The Blue Lagoon is a popular place to go rafting, as is the Rio Grande nearby.

Another famous movie was shot here – Cocktail with Tom Cruise. The place where he learned how to mix drinks in the film is called Dragon Bay Resort and was once a luxurious hotel.

Dragon Bay was damaged in a hurricane and remained closed for several years but is going to reopen as a new concept hotel in 2019. You can get a good look at Dragon Bay on a boat tour of the Blue Lagoon.

This another must-see if you’re visiting Portland. This famous beach became popular in the 1960s when Garfield Weston, the creator of Fortnum and Mason and Selfridges in London, built a hotel with 18 villas.

Frenchman’s Cove is still a hit with stars today, such as a famous local runner ;-). Mango trees are dotted around the edges of the beach and there are changing rooms as well as a restaurant.

The rope swings are a lot of fun too. There’s an entry fee of $10 per day which seems pretty reasonable, given the setting and amenities.

If you’re cheeky, ask the lifeguard if you can borrow his chair for a minute…

The capital of Portland is Port Antonio, and it’s the island’s third largest port from which bananas and coconuts are shipped. Errol Flynn Marina is a charming harbour that’s the perfect place for a stroll.

The famous actor was also known for his eye for the ladies. However, he described this place as “more beautiful than any woman I have ever seen”.

Erroll Flynn was passionate about sailing throughout his life. He first visited Jamaica in 1942.

Erroll and his third wife Patrice moved to Jamaica in 1950. He owned Navy Island and popularized rafting on the Rio Grande.

The small village of Boston, Portland is the birthplace of Jamaica jerk. It’s thought that the jerk pits used to cook this spicy dish were originally a way for escaped slaves to cook without smoke being detected by potential captors.

These days, Boston is a good spot to find authentic jerk chicken, pork, beef, goat and fish. So why is it so spicy? It’s basically down to the Scotch Bonnet Pepper used in the cooking, which is 40 times hotter than a jalapeno!

It’s one of the most iconic Jamaican food dishes and popular worldwide. The annual Boston Jerkfest™ is held in June and features a cook-off, rum and beer tastings as well as live music. 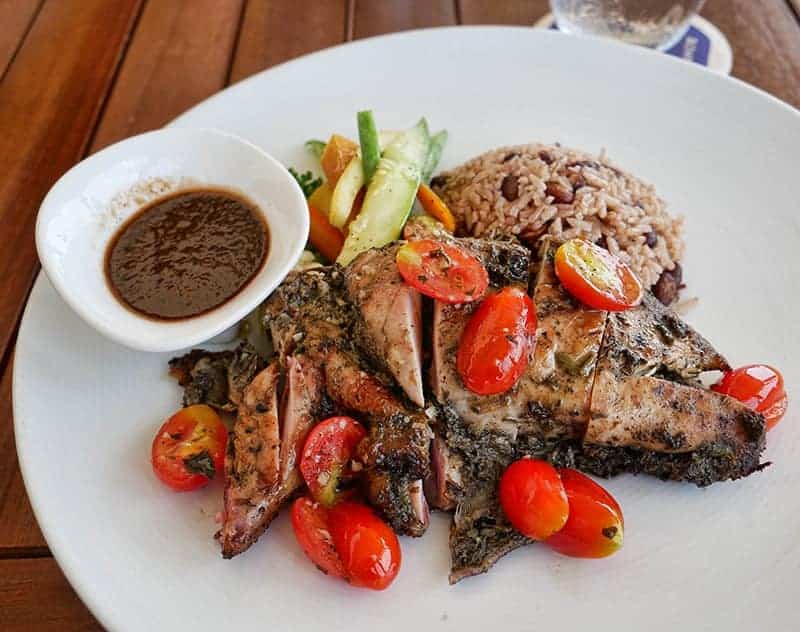 After all that spice, you might want something a bit cooling ;-). Head to I-Scream, in a quaint building on Portland Marina – the ice cream is made using the finest quality ingredients and there are some delicious flavours.

It’s always quite warm in Portland, with temperatures above 20 degrees Celsius throughout the year, although it can be quite rainy. The driest month is generally March, whereas October is the wettest with May and June having frequent downpours.

Kanopi House is an intimate collection of treehouses nestled in six acres of land, just outside Port Antonio. This Jamaican boutique hotel overlooks a quiet bay with direct access to the Blue Lagoon.

This means that guests can enter the lagoon in peace rather than via the crowded general access section. The treehouses themselves are surprisingly large and have an en-suite bathroom. We have to admit this was our first question before booking this quirky hotel.

Some of the treehouses, like Upper Deck where we stayed, also have a separate kitchenette. They’re all equipped with air-con although you could just choose to use the atmospheric ceiling fans instead. Upper Deck is the highest treehouse on the property and the largest at 423 square feet. 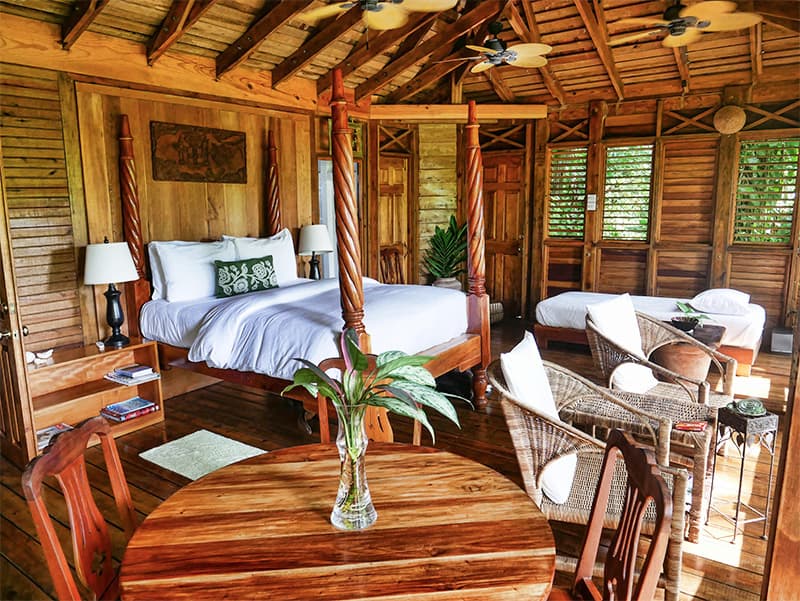 We’re sure some of you are wondering about creepy crawlies as we get asked this question a lot on Instagram. As luck would have it, there aren’t many in Jamaica and you won’t see spiders or snakes. The most you might see is a few small bugs if you don’t close your shutters at night and leave the light on.

The service at Kanopi House is second to none and while you’re dining in the main treehouse, someone will come and light an anti-mosquito coil. They also cleaned our treehouse whilst we were at breakfast which was impressive.

The main treehouse is a lovely spot for lounging on the daybeds and dining, and is a great example of tropical decor done tastefully. Kanopi House is definitely one of the best Port Antonio hotels and staying here is great fun. Geejam hotel is also popular for its rock star vibe and The Trident Hotel is another popular choice for its oceanfront location.

We hope you’ve enjoyed this tour of Portland attractions, and for a closer look at the island’s many attractions, check out our vlog:

We’ll leave you with another quote from Errol Flynn:

“My dream of happiness: A quiet spot by the Jamaican seashore looking out at the activity in the ocean, hearing the wind sob with the beauty and the tragedy of everything. Looking out over nine miles of ocean, hearing some happy laughter near-by. Sitting under an almond tree, with the leaf spread over me like an umbrella.”

You may also enjoy: