Armed with the foundational beliefs that architecture poses significant impact over our perceptions and emotions, whilst acting as a physical framework for thought, San Francisco-based OPA architects have conceptualized their every design based on progressive builds, driven by ideas. Through identifying and crafting spatial experiences, architectural duo, Luke Ogrydziak and Zoë Prillinger, have successfully created the Shapeshifter home on Reno, Nevada. Awarded the AIA San Francisco Unbuilt Design Citation in 2015, and the Chicago Athenaeum American Architecture Award in 2018, this residence caters to a couple of art collectors and dealers, specializing in contemporary art and art of the American West. As a result of their work, they desired a house that would both reflect the contemporary moment and explicitly embody the ‘West’. Taking on the natural environment as more than a ‘site’ for construction, OPA architects referenced the desert as an ambivalent component of the overall cultural imagery. Framed as a barren wasteland, the desert has long been appointed the perfect test site, a place for all genres of experimentation, such as, military, scientific, and social. The desert is rarely seen for itself, instead acting as a mirror for various projected fantasies: wilderness, frontier, and heterotopia. Enduringly mercurial, Luke Ogrydziak and Zoë Prillinger believe it is a sandbox that changes forms to fit the imaginations of the user, a space of ambivalence and uncertainty. 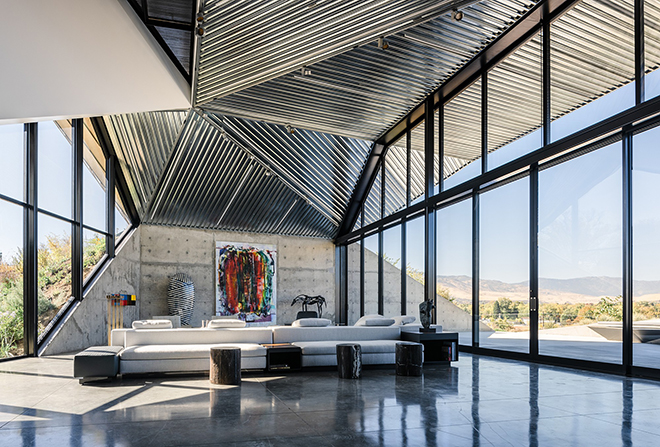 Therefore, this project began by treating the ground as a fluid material that allows different forms to emerge, then flicker or dissolve into other forms – exploring the idea of a slippery form through the lens of a mutable, protean material, an untapped unconscious foundation. Working tirelessly to reshape the site into anticlines, synclines, dunes and blowouts, the Shapeshifter residence sports an extreme difference in shape without discontinuity, allowing each element of the house to slide into each other with shifting relationships of fractured symmetries, local axes, and embedded parallelisms.

Adidas and Social Status Team Up To Create...

The Looking Glass Portrait Expands With Your Creativity...

Behind The Scenes of The Hermès Spring/Summer...