25 Most Instagrammable Places In London

London is one of the most photographed cities in the world, with no shortage of interesting attractions and iconic landmarks. We’ve rounded up 25 of the most Instagrammable places in London, as well as some suggestions for the optimal photo angles.

From iconic London museums to photogenic markets and hidden gems, you’re sure to find several that catch your eye. Happy snapping!

Most Instagrammable Places in London

These Instagrammable London spots are quite spread out, so it’s probably best to choose a few in the same area rather than to see them all in one day.

The gargantuan British Museum houses treasures such as the Rosetta Stone and the Egyptian mummies, and is a great rainy day activity in London. However, when the sun shines, the photo opportunities are even better. 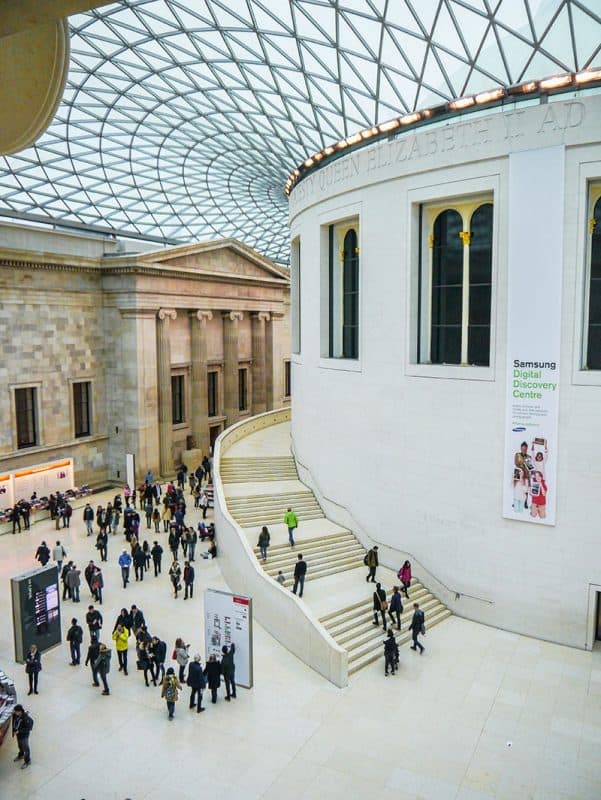 Famous as one of the Queen’s official residences, Buckingham Palace stands proudly at the end of the tree-lined Mall. It’s one of the most iconic Instagram places in London. You can visit the State Rooms inside between the end of July and beginning of October.

Best shot: from the flowerbeds near St James’s Park, where you can capture the whole of Buckingham Palace.

This former market is now a largely pedestrianized zone. There’s an impressive number of fashion stores, restaurants and cultural attractions like the Royal Opera House and the London Transport Museum.

You’ll find some of the most Instagrammable restaurants in London here, including Clos Maggiore and SUSHISAMBA Covent Garden.

Best shot: whilst the piazza itself is attractive, make a bee-line for Neal’s Yard. It’s one of London’s most colourful spots.

4 – Houses of Parliament and Big Ben

Designed by Sir Charles Barry, the Palace of Westminster, known as the Houses of Parliament, is one of the best places to photograph in London. Its Great Bell Tower, nicknamed Big Ben was actually renamed Elizabeth Tower in honour of the Queen in 2012.

Best shot: it’s been photographed countless times so try to find a new angle, or zoom in close for added impact. Sadly, repairs are taking place on the clock tower until 2021 and at the moment the clock itself is covered with scaffolding.

Once a royal hunting ground, Hyde Park is popular for its vast open space and numerous attractions and one of our favourite London sights to Instagram.

Best shot: Hyde Park is so vast that it’s best to pick a focal point such as the Victoria and Albert Memorial, or the Italian Gardens.

Popular with young and old alike, the Natural History Museum is somewhere you’ll want to return to time and time again. Not only to see the dinosaur collection but their superb regularly changing exhibitions like the acclaimed Wildlife Photographer of the Year.

Best shot: the Victorian building looks superb from the outside or the inside, and it looks particularly impressive at night when it’s lit up.

Long gone are the days when you can get close to 10 Downing Street, for reasons of security. However there’s an almost identical door complete with the all important number 10 plaque on Adam Street.

Best shot: there’s scaffolding on the next door building, so you’ll have to angle your camera a little to avoid that.

This Royal Park is definitely a contender for London’s prettiest green space. The wildlife seem to think so too as they’re to be found in abundance, from swans to pelicans and squirrels.

Best shot: from The Blue Bridge towards Buckingham Palace or Horse Guards Parade, depending on the light at the time of your visit.

Designed by Sir Christopher Wren in 1763, St Paul’s Cathedral is an impressive work of architecture. Head up to the Whispering Gallery in the dome to check out the very unique acoustics – just be aware that no photography is allowed inside the Cathedral itself.

Best shot: From Distaff Lane or One New Change shopping centre, the Roof Terrace in particular has panoramic views of the local area.

A hub for street performers, Trafalgar Square is also home to the renowned National Gallery. Take a look at the latest quirky artwork on the Fourth Plinth, David Shrigley’s “Really Good”, a sculpture of a hand doing a thumbs-up.

Best shot: Nelson’s Column, framed by the famous fountains. We wonder what Nelson would have made of the Fourth Plinth!

This tourist favourite is one of the best photo spots in London, however it can get very crowded so try to visit in the morning. The canal near the market is a pleasant place for a stroll and there’s some quirky street art in the area too.

Best shot: Wander around and you’re sure to find inspiration such as the statue of Amy Winehouse who lived nearby. By British sculptor Scott Easton, it’s located in Stables Market.

Another fun shot is this colorful row of quirkily decorated shops.

Escape the hustle and bustle of London for somewhere altogether more serene – Highgate Cemetery. The final resting place of Karl Marx, Malcolm McLaren and George Eliot is a Victorian gem.

Smiling selfies aren’t really appropriate, given that it’s a burial ground but it’s an atmospheric place to pause for reflection.

Best shot: these angel sculptures are real works of art.

For photogenic houses and far reaching views over the London skyline, Primrose Hill is hard to beat. After getting your photos, head to one of the many local eateries on the High Street.

Best shot: these pretty pastels will give you serious house envy.

Take a stroll along the Southbank and you never know what you may find – street performers breathing fire, runners or sand artists creating masterpieces on the shoreline. There are some fantastic South Bank bars where you can enjoy a drink and watch the world go by.

Best shot: the London Eye is a great focal point and can be captured well from Jubilee Gardens. Zoom in for a different perspective.

If you’re into contemporary art then Tate Modern is the place to come and the Switch House galleries are well worth a look.

Best shot: from the viewing terrace on the top floor of Switch House. The views of the River Thames and the Northbank are spectacular.

This distinctive skyscraper is equally impressive when viewed from the exterior or the interior with its panoramic views over Tower Bridge and the Thames.

Best shot: Rich, aka @paperboyo has become InstaFamous thanks to his playful photographs featuring papercuts of well known landmarks, such as The Shard.

When you’re looking for a floral fix, Columbia Road Flower Market makes for a great day out. Just make sure to visit on a Sunday as it’s only open then.

Best shot: take your pick from any of the colourful floral displays.

One of the most Instagrammable places in London for street art, Shoreditch has a real buzz to it. Take a wander around the streets and you’ll find some great places to eat after getting your shots.

Best shot: We like the faces painted on the tube trains suspended in the sky and the’Let’s adore and endure each other’ mural below them on Great Eastern Street.

This church dates from the 12th century but was badly damaged in the Great Fire of London in 1666. The remains are extremely atmospheric and it’s a good place to seek out shade on a hot day.

Best shot: Hone in on the ruined church windows for a moody shot.

Inside Tower Bridge, there’s also a spectacular Glass Floor Walkway from which to admire the views.

Best shot: from the South side of the river just past the bridge – or on the bridge itself whilst there’s no road traffic.

Another of London’s most famous landmarks, the Tower of London dates from medieval times. This former royal residence and prison houses the Crown Jewels and the six resident ravens which must never leave or legend has it that the kingdom will fall.

Best shot: from inside the Tower of London you can capture Tower Bridge as well.

This world-famous department store has undergone something of a Renaissance in recent years, with a major update and cool new brands. The Egyptian staircase is one of the top London Instagram spots.

Best shot: Harrods looks as beautiful from the inside as it does outside. 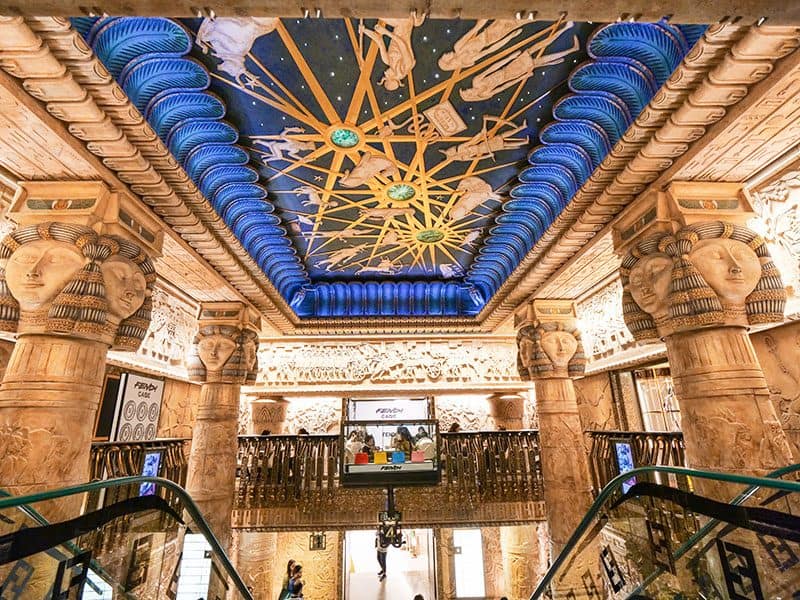 Whether you’re a fan of gardens or not, Kew Gardens is one of the most beautiful places in London. The Hive is a unique new structure exploring the story of the honey bee, and children will love the Treetop Walkway.

Best shot: the Waterlily House or the spiral staircase make for superb captures. For something a bit different, head inside the Marianne North Gallery, covered in botanical prints from floor to ceiling.

Made famous worldwide by the film of the same name, Notting Hill is one of London’s most exclusive areas. Yet it retains a bohemian vibe that only adds to its charm, making it one of the top London sights to Instagram.

Portobello Road is a famous London street thanks to its weekly flea market. Westbourne Grove is another charming street with many luxury boutiques.

No round up of the best photo spots in London would be complete without a mention of Peggy Porschen. This beautiful bakery is one of the most Instagrammable London restaurants.

Painted in a delicate pink hue, it has regularly changing floral displays. The cookies and cupcakes are delicious too!

Best shot: The bakery’s exterior displays at Christmas, Valentine’s Day and in Spring.

We hope that you’ve enjoyed this selection of the best London photo spots. For more adventures in London and beyond, follow us@luxurycolumnist and our fellow creatives featured here, who gave permission for their photographs to be included.

Where would you add to the list? Regent’s Park, the V&A, the Kyoto Gardens in Holland Park?

Looking for more travel hacks and tips? From hidden gems to unique experiences, we’ve got you covered.

This article may contain affiliate links.

Cash, card or Bitcoin? How luxury brands are ramping up the exclusivity by giving crypto’s overnight millionaires new ways to spend their digital cash